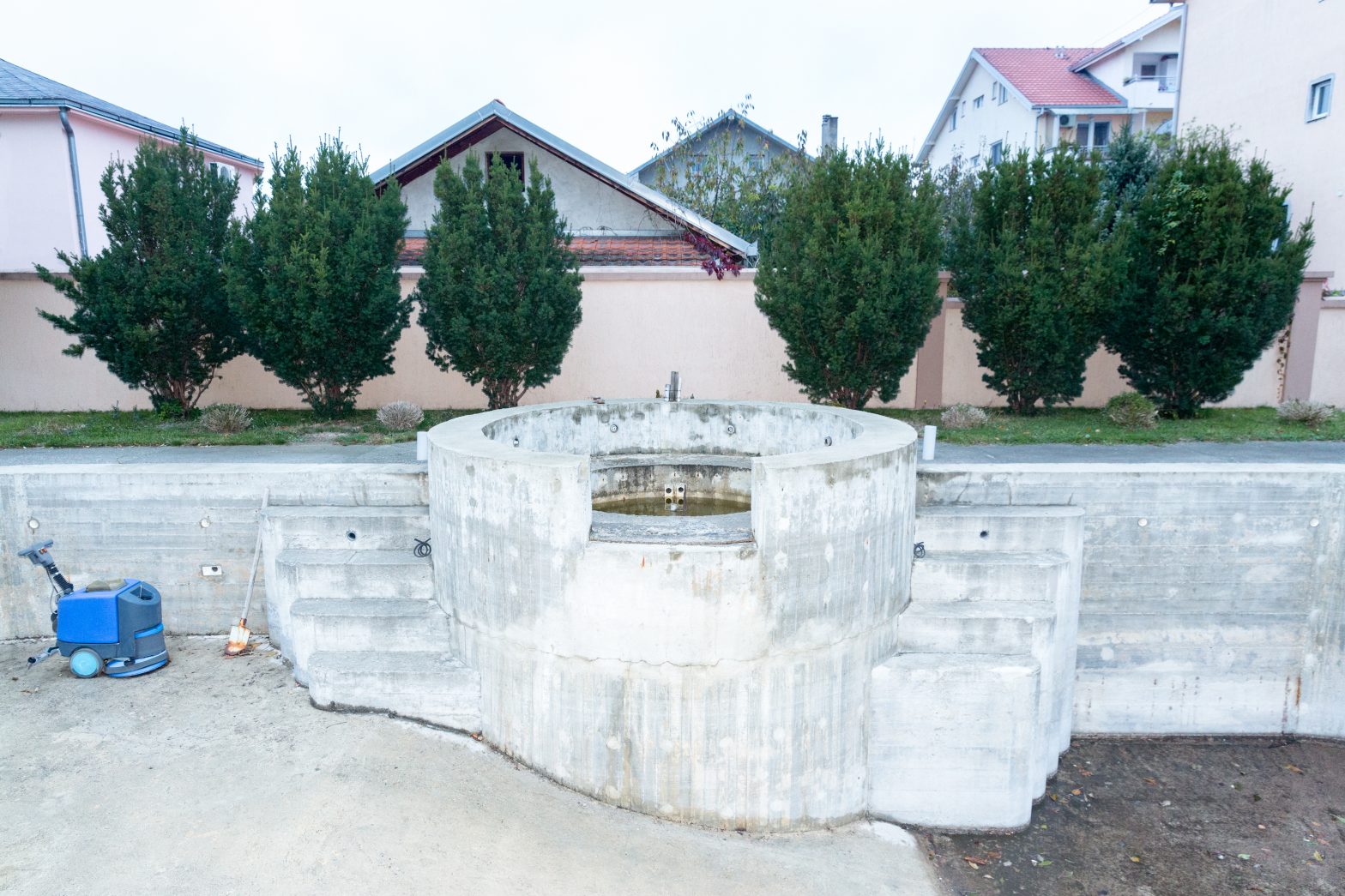 During my research a clinic in Serbia pops up that offers autism treatment with stem cell therapy. They are eager to share their vision and offer to send a driver to pick me up from the airport. I ask the driver if he remembers driving autistic patients which he confirms, „but rarely“ he adds. He remembers „difficult“ children. It’s a 20 minute drive to the western part of Belgrade. High walls shield the clinic from the outside world, an automatic door reveals a view to a small villa with little spires, the reception is guarded by a heavily tattooed bouncer. Something tells me I’m in stem-cell-Disneyland.
Doctors and nurses scurrying through the halls, cleaners are busy cleaning behind everything that moves. I need to go the toilet, but the bathroom is blocked by – you guessed it – a cleaner, cleaning the toilet. Before anything happens I need to put on gloves over my shoes, someone explains that some of the customers have trouble with their immune system. They seem to have two kinds of doctors: Standard doctors, in white coats, and doctors in uniforms who primarily talk to clients. Mine, a young female with heavy makeup, is wearing a high collar, close cut, maroon colored uniform. It reminds me a bit of the old school Star Trek uniforms. I guess the science fiction outfit is supposed to match the cutting edge treatment. Then I remember that in the original series, actors in red uniforms usually were the ones to be killed by the „monster of the week“. We agree on a quick interview, after that someone else will give me a tour of the building. Can I record audio, to transcribe it later? „No“. Can I take a photo of you? „No“. Can I quote your name? „No“. Awkward silence. I’m thinking hard how to continue. In an attempt to lighten the mood and show the absurdity of our situation, I ask if in my notes I should call her „Doctor X“ and to my horror she says „Yes“. Now who’s the one who doesn’t understand irony. I remark that maybe „Doctor X“ sounds a little bit too James Bond, maybe we can use the first letter of your real name? She agrees to „Doctor M“. I’m wondering what she thinks what they are doing, given these reservations. But ok, „M“ it is. „M“ is also the title of one of the best movies of all time, directed by Fritz Lang in 1931, starring Peter Lorre. It’s about the hunt for a serial killer that’s targeting children.

She gives me a broad introduction of the clinic, the focus being on neurodegenerative diseases, the main clientele are patients with multiple sclerosis, autistic patients are a minority. She says they have several „weapons to combat“ autism, and stresses the importance of a multidisciplinary approach. Multidisciplinary approaches I like, the weapon part not so much. Before they start therapy, they would need the patient at maximum health. This is achieved by a mix of vitamins, supplements, amino acids and so on, lots of infusions, plus a bunch of tests. They are checking for colon infections, such as candida. They adjust the diet accordingly, because lots of autistic patients rely on very one-sided diets. One of their clients ate potato chips all day, everyday, she tells me. Then, the therapy itself starts: speech therapy, behavioral therapy, chelation, stem cell therapy, the whole arsenal, if you want to stay with her original word style, all the „weapons to combat autism“. She explains the methods on how stem cells are obtained, from bone tissue or from fat, but to be honest I’m tuning out. I ask about the average age of autistic patients, she says so far it is only kids, mostly preschoolers. I ask if they have a minimum or maximum age that they would touch, she says they don’t treat kids under five years of age. How do the kids compare, before treatment and after? She says they’re selling no cure, no miracle, but that they can stop progression and improve quality of life. When they arrive, they are often unruly, aggressive to self and others. After therapy they show „more adequate behavior“. The costs of the treatment? Depending if you stay at the clinic or choose outpatient, the cost of the treatment varies between 13.000 and 25.000 Euros.

After the interview the tour is supposed to start, but there seems to be a problem. Somewhat hectic chatter, all Serbian, can’t make out a thing. It turned out they either confused me with someone else or misunderstood my intentions entirely, because they thought I was an online blogger who wanted to write a flattering article about the clinic. Early during the interview I dropped the term „documentary photographer“ and now they weren’t so hot about the whole thing anymore. I was being told to wait in an office. The tattooed bouncer was standing in the corner as well, I think he wasn’t sure what he was doing there either. People around me are constantly on the phone, I overhear someone speaking Russian. After an hour or so, I’m being offered a cellphone, a call from Moscow, the „boss“ wants to talk to me, a „Dr. V“. Dr. V. wants to know more about my intentions and that’s what I’m explaining to him, I’m a photographer, trying to show how different people approach autism. I didn’t ask for another interview but I get one anyway, he continues explaining that autism can’t be cured, that it’s not acquired but innate and that what they do is mostly about improving quality of life. No complaints or questions from me, it’s mostly him explaining the business, I sense him being very cautious and defensive. I mostly say stuff like „yes, and exactly that is what I’m trying to show“. I’m not even lying there. This goes on for about half an hour before the call abruptly ends, either he hung up on me or one of us lost service, so I hand back the phone. No call back, just more waiting, more awkward silence. My guide seems to be just as lost as me. Three quarters of an hour later – I guess they googled the shit out of me – another call. My guide says we have a green light for the tour. All she wants is for me to sign an agreement, that says that I can’t photograph any patients. That’s ok for me, didn’t want to do that anyway.

I’m told we can’t see the main treatment room because it has to be tidied up first, so we’ll start with more general areas. Dining hall, waiting areas, rooms with lots of medical equipment, rooms with less medical equipment, just like you would imagine a private clinic, you get the idea. We meet very few patients, a middle aged man who seems to have trouble walking. A young man accompanied by his mother, both dressed as if they were headed for a cocktail party, a tad arrogant. I’m wondering what his deal is, except for a certain nervousness, constantly fiddling with his cigarettes. The whole facility is monitored by CCTV, but I’m a bit surprised to also find cameras in the private rooms for the guests, including bed- and bathrooms. This is necessary I’m told, because the clinic also offers drug withdrawal for wealthier clients. I’m wondering if that’s also the reason for the bouncers and I get a nod from my guide. I think I got an idea what the odd couple I just met before is doing here.
We continue outside, a little pavilion full of sports equipment. What particularly caught my eye that day was what looked like the concrete foundation for a swimming pool and a jacuzzi. This involuntarily brutalist sight seemed honest, contrary to the rest of the show. Suddenly someone calls something over in Serbian, my guide says the treatment room has been cleared, I can photograph now. I wasn’t really prepared for what I would find in that room. The room was supposed to be empty. It wasn’t. A room like in any hospital, two beds, lots of equipment, staff standing around, waiting for me to do my magic and disappear again. Problem is, they cleaned the room, but they didn’t really clear it. One bed was empty, in the other there was a young man who didn’t look so good. Raw-boned, muscles atrophied, padded up with blankets and cushions from all sides. Tom Hanks at the end of PHILADELPHIA was looking healthier. A nurse did not feel like waiting for me to be gone and tried to administer infusions, stem cells I would assume. The young man started moaning quietly and kept repeating „I don’t want this. I don’t want this anymore“. The nurse replies in the vein of „No, this is good. You made a choice. You want this. Your life will change.“ What the fuck is going on here. Should I leave, should I photograph? I decide that if I don’t photograph, my visit will have been in vein. Carefully I shoot away, when suddenly I get interrupted. The moaning of the man gets louder. A man who identifies himself as a physiotherapist takes issue with what I just photographed. But I never pointed my camera in the young mans direction. More Serbian chatter. The bone of contention is not the patient, but a small display case full of colorful phials and nursing bottles, in the corner besides the empty bed. They explain to me that this display pretty much contains all their secret potions, anything that sets them apart from their competition. I find the keyword here to be „competition“, which perfectly describes the race for a miracle cure, for paying parents that want nothing more than a kid that looks them in the eyes and smiles more than the one they have now. The young man in the other bed slowly cranks up the volume. Nobody seems to care about the objections of the patient, instead they insist on looking at my shots. The man in the bed seems to be in agony. Yes, I photographed the display case, they find out. They want me to zoom in. No, the resolution doesn’t suffice, they feel safe. I don’t have to delete anything, I’m declared innocent. Now the young man is crying out at what I think is the best he can do. It’s not the volume, it’s the misery in his voice. At this point one of the nurses remembers that there is a curtain between the beds and she uses it. The doctor, previously only worried about the display case, got the hint and started looking a bit uncomfortable, telling me to wrap it up. I say I’m done and they lead me back into the main corridor. The interview with M., the negotiations with V., the tour, it all took so long it’s the end of the working day. I’m led into the kitchen of the facility, where the cleaning ladies are getting ready to leave. I’m offered cake, but thanks, I’m not in a cake mood anymore. I’m told all drivers are busy and they offer to call a taxi. On the drive home I revisit their homepage, which includes flaming testimonials from parents with autistic kids. „Finally daddy can sleep again“. They also have a section where the medical staff is listed. None of the doctors I spoke or met today are on there, I assume it’s stock material. By the time I’m writing this, the clinic has disappeared. Five other branches still exist, two of them just outside the European Union. I feel like watching some Fritz Lang now.